The Fault In Our Stars
Hazel Grace Lancaster is the main character. She has lung cancer and her mom makes her go to support group. "I'm Hazel, I'd say say when they'd get to me.Sixteen. Thyroid originally but with an impressive and long-settled satellite colony in my lung" (Green 5). When asked to give an introduction at support club, this is what Hazel says. She had thyroid at the age thirteen but when they did an x-ray they found a tumor and she was diagnosed with cancer. She was a beautiful 16-year-old girl, with a pageboy haircut. She had green eyes and a large face. "Also my hair: I had this pageboy haircut, and I hadn't even bothered to like brush it. Furthermore, I had ridiculousy fat chipmunked cheeks, a side cheeks, a side effect of treatment. I looked like a normally proportioned person with a balloon for a head. This was not even to mention the cankle situation" (Green 9). The physical similarities were striking: same steroidally round face, same nose, same approximate overall body shape. But her eyes were dark brown (mine are green) and her complexion was much darker -- Italian or something" (Green 96). Hazel looked very similar to Augustus's ex-girlfriend. She was looking her up and saw how they could be sisters.
Isaac was a boy that Hazel met at support group and sometimes the only reason she wasn't bored out of her mind. She didn't like him like "that," but they had their own way of communicating. They would communicate through sighs and they both automatically understood each other. "The only redeeming facet of Support Group was this kid named Isaac, a long-faced, skinny guy with straight blond hair swept over one eye.
And his eyes were the problem. He had some fantastically improbable eye cancer. One eye had been cut out when he was a kid, and now he wore the kind of thick glasses that made his eyes (both the real one and the glass one) preternaturally huge, like his whole head just this fake eye and this real eye staring at you. From what I could gather on the rare occasions when Isaac shared with the group, a recurrence had placed his remaining eye in mortal peril" (Green 6). Thanks to him, Hazel's life was changed. He one day brought a friend along and that friend was a little more than a friend to Hazel.
Augustus Waters was the best basketball player in his high school and the most attractive. He came to Support Group because he was requested by Isaac. He had cancer and to help stop the cancer from growing, he had to have one of his legs cut off. "Long and leanly muscular, he dwarfed the molded plastic elementary school chair he was sitting in. Mahogany hair, straight and short. He looked my age, maybe a year older, and he sat with his tailbone against the edge of the chair, his posture aggressively poor, one hand half in a pocket of dark jeans" (Green 9). Augustus and Hazel quickly became friends and he changed her life. They did a lot together and Augustus even took Hazel to Amsterdam. 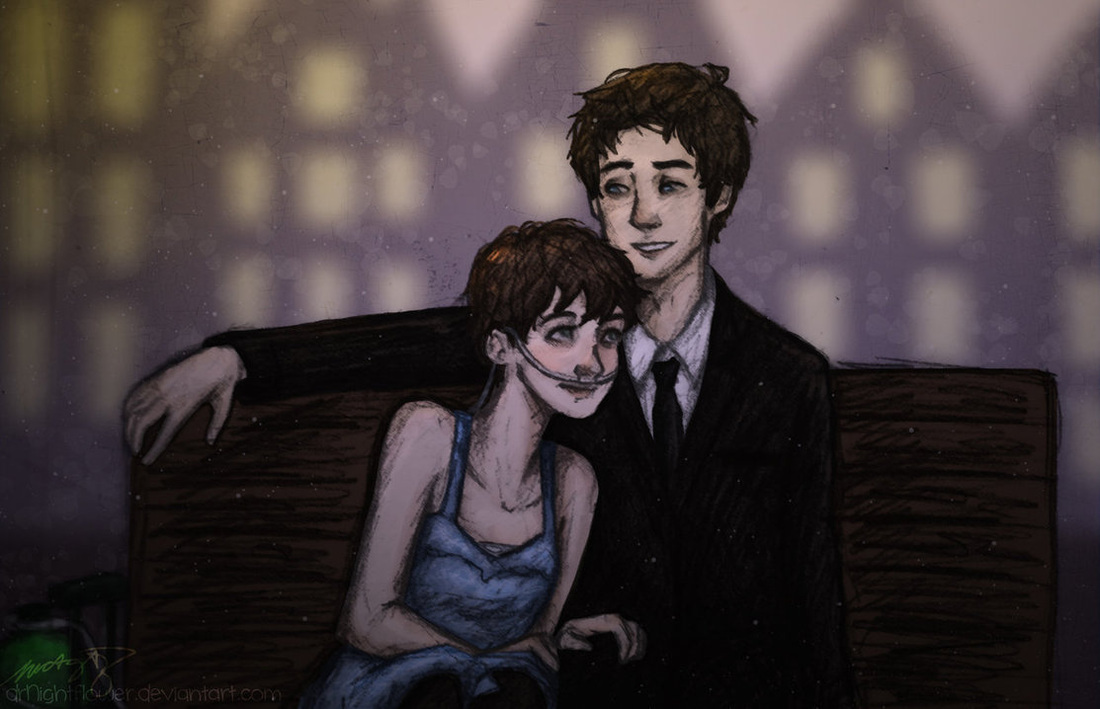